Accountability in Myanmar – a tale of two towns 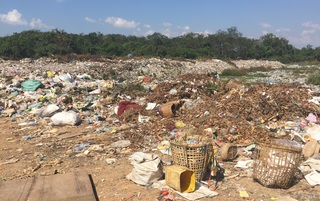 While many CSO in Myanmar are facing Nay Pyi Taw, we have our feet in a muddy drain and waste dump of two towns in Tanintharyi Region. We, that is VNG and Loka Ahlin in cooperation with the regional government and with support from the European Union Delegation to Myanmar, are trying out social accountability training. Because accountability and transparency can quickly become quite abstract, our training is organised to solve a town problem. After each of the 3 modules, participants from the municipality and other relevant government departments, CSOs and the business community apply the insights and skills gained to a small ‘real life’ project. In one of the towns participants selected a clogged up drain, in another town they aim to improve the waste management satiation in a few wards. What are we learning along the way?

Access to information
There can be no accountability without knowing what the municipality is responsible for. The challenge lies in developing a relationship that gives access to information, for instance the municipal budget. We discovered that the order to keep all government information internal is still active, so action may be taken if staff shares information with the public. This may be why one town doesn’t share the budget yet with the elected representatives in the ‘Development Affairs Committee’ (the DAC is a fledgling local council, many representatives have been selected rather than elected through popular vote), while the other town has developed a brochure with budget information for citizens.

One cannot underestimate the importance of access to information. As an example, in the ‘drain’ town the ward administrator was getting ‘two roads and one bridge’, but the ward wanted their drain to be made functional. Is it possible to have a drain, rather than two roads and a bridge? The ward administrator explains the urgency of the drain project: “The water stagnates and it becomes very messy, with lots of mosquitos. Last year 2 children died in the ward from dengue fever, which we believe is due to this drain problem. Hundreds of people suffer from this bad drain: the smell becomes hard to stand after the rainy season.” The training group requested the municipal engineer to make an estimate of the work to be done, which came out very (too) expensive. Later the group found out that government estimates are almost double to cater for inflation: you never know when a project becomes reality, and as it is impossible to adjust budget estimates, it is better to prepare enough funds ahead of time. Moreover, the municipal law states that all activities must be audited by government auditor – which implies that it should not tender to the private sector, and quality standards do not always apply in self-implementation. Gradually participants discover such pieces of information – which obviously determines what can and cannot be expected from the municipality: what it can be held accountable for.

Serving all people in the town
One of the municipal staff was very much taken with a stakeholder visualisation tool, with which training participants began to identify different interests: she wanted to take it back to her office. It is important to consider the ability of CSO to represent and/or bring out interests of various groups, including vulnerable groups and gender dimensions. How representative are the CSOs of a variety of interests? In the case of our training, the CSO participants do not seem to have deep roots in society. They are not representing a particular membership. It is interesting that participants from the local NLD and USDP political parties do represent a membership (and they behave like activist CSOs). However – the municipality should serve all people, not only those who voted for the party who is in power. Efforts must be made to hear all voices. In this training we focus on a CSO role as facilitators: they can study a variety of voices and bringing these to the municipal table. It will be a major achievement if one of the municipalities can actually host such a public meeting with a variety of people/interests present.

New relationships and small results
On our last visit, the Executive Officers (EO), highest municipal official in town, came to the training. It was the first time ever for most CSO participants to engage with a decision maker in an open manner. It proved impossible to change the ‘roads and bridge’ into a drain project. Fortunately the EO of this town had been asked by the region to develop a budget for one year rather than 6 months, so there could be some space in the budget for a drain. The EO invited the ward to submit their project, “but we have many criteria”. So that’s the next piece of information which the CSOs will try to uncover. They will also prepare to present the project to the DAC, so that the impact of the investment can be well understood by the decision makers. Before the EO left the training room, another ward administrator made sure his ward could also submit projects to the municipality. Perhaps the EO should work to inform all the wards in the town about this opportunity? Note that there is no official relationship between the ward administrators (who are part of the township administration) and the municipality. Oh well, lots of new local governance relationships are emerging, and these will gradually get documented and eventually approved by legislators.

In the other town things have been moving a bit more swiftly. A small group of CSO participants has already been invited 3 times to attend the DAC meetings. The group also invited the DAC chair to attend one of their meetings regarding the study of the waste management situation. The DAC chair took a copy of the attendance list and created a Viber group to stay in touch with the CSOs. A few weeks later bird flu broke out in the town, and the DAC chair asked the CSOs to help out, which they did. That was an unexpected, successful first “joint action” between the municipality and CSOs in this town. Not a bad training result and we are not even done yet!