This paper was prepared for the Governance, Accountability & Citizens' Empowerment workshop in Dublin together with Tamiru Lega Berhe (ESAP2) and Tamrat Getahun Woldemichael (KMG-Ethiopia). The paper can also be downloaded here.

The Ethiopia Social Accountability Program, or ESAP2, is a multi-donor trust fund for grant making and capacity development. It is part of the Citizens Engagement component of a broader government program known as PBS - Promoting Basic Services.

The complementarity between the 3 programs under the Citizens’ Engagement component of PBS: Financial Transparency and Accountability (FTA), ESAP2 and Grievance Redress Mechanism (GRM) is as follows:

FTA already covers all 900+ districts in the country, and there is a collaborative practice between FTA and ESAP in the districts where ESAP operates. The development of GRM has just started.

The 49 grantees of ESAP2 each work on two year projects in 3 to 5 districts. Some partners work with sub-grantees, so a total of 107 Ethiopian organisations are currently facilitating social accountability in 5 basic public service sectors, covering over 25% all districts in the country, across all 11 diverse regions of the country.

We will present three key challenges, and discuss what we have done in the ESAP2 Capacity Development and Training team to overcome these.

Our first challenge is related to an initial focus on social accountability Tools, which made it difficult for our partners to make a good start with their two year project.

Social accountability starts with mobilisation and awareness raising of citizens and service providers, and it is critical to get all stakeholders on board and to begin to build commitment and relationships among:

We quickly discovered that more guidance was needed to making a good start – and a good finish for that matter: working towards sustainability of Social Accountability, but more about that later.

We responded in two ways: we gradually designed a social accountability process, and we developed thoughts on how the SA tools might be combined over time. 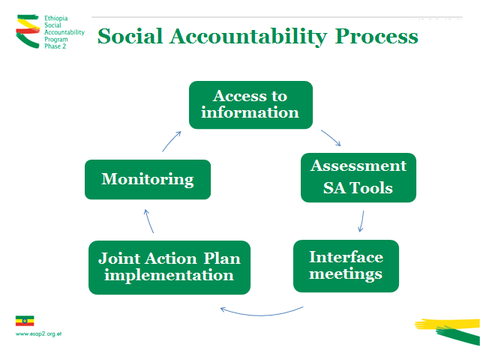 As this slide shows, the initial focus on SA tools was only one piece of the SA process puzzle. For instance, partners would ask us how to conduct and interface meeting, and what they would do after the interface meeting when the tool was “done”.

With the second batch of 19 grantees, we have introduced the notion that SA is a process:

The SA process includes an overview of roles of various stakeholders at each step of the process (See: table at the end ).

We noticed that some of our partners do not fully understand the different roles and responsibilities of stakeholders and their accountability relationships. In a nutshell:

Because service delivery is delegated, the first step in social accountability is from citizens to the (sub-district level) service providers, like teachers, health and agricultural extension workers, water supply and road maintenance committees. Are they delivering services as approved?

In case the service issue cannot be resolved at that level, the second step is to the district administration/sectors. Are they delegating as approved? Are they making sure that service providers can do a good job, by providing approved resources and support?

With social accountability in Ethiopia, citizens are supported to hold service providers accountable, and to go up to the district if needed.

The district councils (local parliament) will control if government executes the standards and plans as per what was approved. The council can do this through a direct link with the citizens, for instance by participating in the social accountability process: where citizens hold service providers to account.

We can see this tripartite structure of accountability relationships back in the composition of the SA Committee. More about this committee in a moment.

Some of the challenges noted in this regard are:

Next to designing the social accountability process, and working out the roles of each stakeholders, we also had a closer look at how the SA tools were used by our partners.

We noticed that most of our partners had selected Community Score Card (CSC) and Participatory Planning and Budgeting (PPB). Partners found that our Gender Responsive Budgeting (GRB) tool was not very practical, and we were discussing if they could use GRB principles to enrich the PPB process. Later, when we were developing the PETS tool, we realized that it could be seen as a tool with which citizens could monitor service improvements or budget allocations that were agreed earlier on in the SA process when the CSC or Citizen Report Card survey was used. PETS can of course be used for assessment, but this is usually not where CSO’s and citizens in Ethiopia choose to start the SA process.

These findings inspired us to think about the tools in a slightly different manner:

One partner explained it as follows:

through the community score card people are educated about their rights as well as their responsibilities. When they start considering the mobilisation of resources for service improvements, it occurs to them that they need to understand the sector budget. When issues are beyond the community resources to deal with, they can ask for future assistance from the Woreda budget. The participatory planning and budgeting tool facilitates this process.

Challenge 2 - the right people on board

Our second challenge is the contextualized identification of vulnerable groups and their inclusion in the SA process.

We promote inclusion of vulnerable groups in the SA process. The challenge was that the concept of vulnerability (women, youth, elders, people living with HIV-AIDS or with disability) was not always well contextualized to the situation in the district, or the sector. For instance, food insecure households were not identified as a specific vulnerable group in agriculture. Also, partners felt they had to target PLWHA or physically challenged people even-though they had no contextualised understanding of why this would be important. Thus we could find PLWHA were participating in the assessment of the agricultural sector, but they were not users of agriculture services.

Related to this was the empowerment of vulnerable groups and their involvement in the SA committee, the tri-partite structure we briefly hinted at in a previous slide. In Ethiopia, SA is driven by the government, so local government wants to be firmly represented in the SA Committee (SAC). They see it as part and parcel of the good governance agenda of the federal government. Yet it is important that various social and vulnerable groups are in the majority, otherwise the whole idea of Social Accountability is lost (i.e. government already has systems to hold itself accountable). However, due to pressure of local government to be on the committee, and also other considerations, for instance "with local government on the SAC the SA process can be sustained"; or "citizens find it difficult to attend frequent, far away meetings in the district capital"; a situation had grown were most SA committees at district level were either dominated or complete composed of government staff.

This issue was on top of our first learning agenda last February 2014, under the slogan: “citizens in the driver’s seat”. We are pleased to report that the composition of SACs has drastically changed since then.

What is the SAC? The SA Committee facilitates the SA process, with support from our partners for a period of two years. The SAC is a tri-partite structure that brings together representatives of citizens in various social and vulnerable groups, service providers (and their administrators) and elected council members.

Why not just citizens in the SAC, you may wonder? In the pilot phase of ESAP1, the tri-partite composition proved to enable trust building and to facilitate dialogue from the start of the SA process.

Apart from us making majority citizen membership a major point during the learning benchmark meetings, two things appear to have facilitated the drastic change away from government domination in the SAC. First of all, most projects were at the interface meeting stage, and this seemed a good time to simply elected a new SAC to monitor service improvement agreements. Secondly, to convince the local government that citizens should be in the majority, the partners explained that an all government SAC looks like an internal accountability mechanisms, and misses the point of citizens holding government to account. Local government is beginning to like social accountability, because it solves local service problems and mobilizes local resources like never before. They understand it better now, some time into the process.

So, now there is a better representation of diverse social and vulnerable groups, not just during the tool application, and in the sub-district SAC, but also also in the district level SA Committee.

Partners work in 3 kebeles (sub-districts) per district, but there are actually many more sub-districts per district, up to 25 or more. We encourage partners to disseminate SA messages beyond these 3 kebeles, but there is little experience on how to do this well. There is also little evidence to suggest that in Ethiopia citizens will take up an SA process on their own. So one of the questions is how the district SAC can gradually loop other Kebeles into the SA process. Can this be driven by service providers?

The SAC is to be sustained from local resources – Indeed, there are SACs from the pilot phase that are still functioning without external support, but we must further study these cases to understand the conditions in which this can happen.

Moreover, sustaining the SAC locally points in the direction of mainstreaming SA processes into existing structures and organisations (e.g. ICBPP, and mass based organisation having representation in the SA process as part of their duties). We are building an action-research agenda to support SA mainstreaming.

There is also a longer term dimension to sustainability. The attitudinal changes that we are aiming for are so great that it will require many, many years of awareness raising and process facilitation in one way or the other before SA can become a way of life. In Indonesia for instance, it took 15 years to develop and sustain mature dialogue capacities between citizens and their local government. Such a long term investment requires a sustained commitment from government to keep investing in civil society facilitation of awareness and dialogues.

We have four key strategies to build commitment for this, which can be summarized as follows:

Widening the space is all about networking, and about feeding people and organisations that can influence the political process, such as:

Does the social accountability process lead to service improvements?

Although it is early days, from the Joint Action Plans in 80 districts we can distill a number of service improvements results, which are summarized here:

Below some sector specific examples are provided of service improvements that have already been realized although the projects are still ongoing.