For international women's day, I wrote a blog about women in Vietnam.  "Vietnamese women deserve to be treated special at least one day of the year, as the men seem to do very very little in the home. Listening to newly wedded Vietnamese women, that is not really changing yet either. And I'm speaking to middle class women, who speak English. One would expect change to start from there, no?" (full blog)

Last month  I emerged myself in gender issues in Vietnam's Higher Education System. Developments in Vietnam go with speed of lightening. In the last decade, the number of students enrolled in higher education has grown with 60-70% and more, depending on the sector. Data show that women are catching up, even in non-traditional sectors. It was my job to discuss what could be done to stop adverse impact of gender issues in the university context.

The interesting aspect in my assignment was the university collaboration with the world of work, private businesses and public organisations that employ graduates. The higher education system is catching up with the demands of a growing economy in the 21st century. It was striking to find that many businesses prefer hiring male graduates, especially when some mobility is required, for instance to sell seeds or fertiliser in remote areas. Employers also prefer men because young female graduate are bound to get married and have children soon after graduation. Of course Vietnamese men do the same, i.e. get married and get children soon after, but employers do not think that affects their freedom in any way. Women carry the responsibility for the happiness of the family, and men do very little in the household.

In the university setting the expectations towards women are no different. Some women explained to me that they would want to take up leadership positions, but they cannot because of the family. The few women who do hold leadership positions all specifically mentioned to me that they can only do this because their husband helps out in the household. I was pleased to hear this: so there are Vietnamese men who help their wife! I mostly met students with fairly traditional expectations about their future husband/wife. I will not easily forget what one boy said: When my father's mother became ill, my mother left her job. I admire such sacrifice,and I will marry a woman just like that!  Or the girl whose ideal husband will earn more then she does. On the other side of the spectrum, one of the girls said that she is ambitious and wants a husband who can support her in her ambitions. A radical boy shared: I think it is not fair that women do everything in the home and men go out and drink with their friends. I want to change that. I will help my wife when I marry. I also think men should be the main advocates for gender equality  because the main problem is with men!

Well, women are also part of the problem. I ran an online survey in 8 universities (I love survey monkey), and it showed that almost 10% of female respondents believe that women are not suitable for management and leadership positions (compared to 18% of male respondents). What I liked best about my assignment, that several women are perfectly capable of explaining why they are currently not at par with men, and what needs to change. I believe that as more women in Vietnam are exposed to the notions of gender equality, it will happen with the speed of lightening.

(I used cartoons to capture proverbs and jokes that demonstrate thinking in society about men and women. I made the cartoons myself with a great online tool for people like me who are creative but cannot draw.) 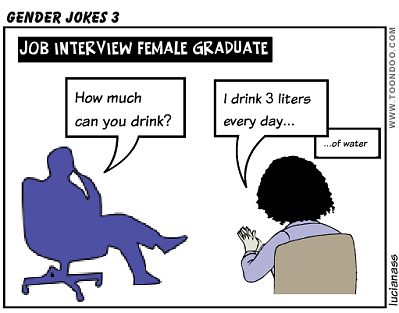