How to organise a live Twitterfeed offline?

My client wanted to have a panel in the seminar for grassroots organisations in Myanmar. They had invited interesting guest speakers, but I have developed an allergy for panels with 4 times 15 minutes presentation, after which the audience can ask questions. I learned that very few people are capable of delivering a memorable presentation. Moreover, many speakers take longer than the planned quarter of an hour, so that time for audience questions is reduced to a bare minimum. And then each audience harbours people who really do not have a question at all, but they like to hear themselves speak. Those tend to be the people who walk up first to the audience mike. So if I am the organising facilitator, I will work on an alternative form of interaction between speakers and public.

Over the weekend I watched Q&A, an Australian political talkshow. The host will lead the panel conversation and will also invite them to respond to an #Q&A twitterfeed. Viewers will see the twitterfeed running in the bottom of their screen. Unfortunately, something like this is not yet feasible in Myanmar (or Birma) or is it? I wanted to give the grassroots organisations a taste of what might be possible in the not so distant future. I am not easily discouraged, and came up with the Living Twitterfeed. It worked like this...

While the guests take a seat on the podium, I ask the audience to imangine watching television in the comfort of their home.

It is the year 2013 and you all have a mobile phone, because the price has come down from 1500 to a reasonable 5 US dollars. You will use your mobile to send comments and questions to the live broadcasting. The panel can immediately respond. As panel facilitator I have a set of three guiding questions to structure the conversation with the panel members. 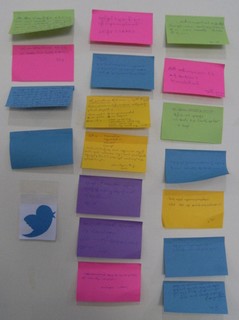 Logistical arrangements are as follows. On the podium, next to the panel is a screen for the twitterfeed. It is placed at an slight angle, so that both the audience and the panel can see the screen. There are people around the hall with a twitterlogo on their chest. The public can give them their tweet, a post-it with their name and a short comment or question. The twitter-feeders take the notes to a typist, and as he types the text is projected onto the screen.

The panel members as well as the audience thought it was a successful experience:

I would do it again if the opportunity presents itself. It may also be a good experience in countries where internet and mobile is affordable and working, but where people still need exposure to the benefits of social media (e.g. equitable access and increased transparency). Or use it in case the poll-everywhere is not an option…