How to connect with the CBA community leaders? 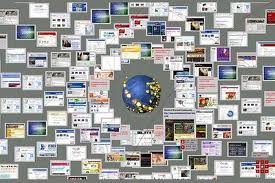 Over a year ago I started my first consultancy in the climate change community. I am a capacity development facilitator, so my first interest was in finding out what others are doing. I got completely lost in the forest of climate change websites and portals, and to get in touch with the right people was next to impossible.

For instance, I was…

How to write a book with 20 grassroots organizations? With development loosing political interest in much of Europe, It has become even more important that stories of grassroots organizations get told and heard. Local organizations however usually dread reporting time, and most will not see monitoring and reporting as an opportunity to learn.

How to organise a live Twitterfeed offline?

My client wanted to have a panel in the seminar for grassroots organisations in Myanmar. They had invited interesting guest speakers, but I have developed an allergy for panels with 4 times 15 minutes presentation, after which the audience can ask questions. I learned that very few people are capable of delivering a memorable presentation. Moreover, many speakers take longer than the planned quarter of an hour, so that time for audience questions is reduced to a bare minimum. And then each…

What to do on International Women's Day? 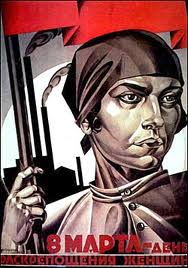 I was checking out events on International Women's Day, next week the 8th of March. Then I remembered that Vietnam has its own National Women's Day on the 20st of October. That day has grown into something like Valentines Day, or Mothers Day. Women expect to receive flowers and to get pampered by…

What is your role in a community of practice? 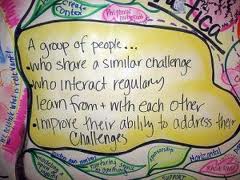 Over the weekend, I followed a tweet to test your role in a community of practice. It comes just at the right time, when I am preparing to facilitate an online community for the first time in my life. I thought it might help me recognise various types of…

How do you help people to develop? The SNV Way

Most development workers know that development depends on people's own initiatives. Yet, that is easier said then done. How do you then help people to develop? It's a profession! That's why SNV Netherlands Development Organisation, an international NGO, is investing in professional development of its advisors.

The international organisation I am working with at the moment has been succesfully supporting the government with multi-stakeholder sector development. All donors and international technical assistance providers, including the organisation I'm consulting with, have agreed to align within one national program. International consultants have just arrived in the country for step two in the design of a multi-donor supported program.

Yesterday I discovered that the national government…

Social networks have a life of their own 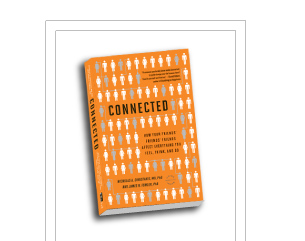 2011 was the year in which I discovered what social media can do for me. I’m intrigued by how using social media changes me, or rather changes the way in which I work and connect professionally. For the Dutch course I am following on social media and change, I read a book on the subject. Finding books like…

Look for something, find something else, and realize that what you've found is more suited to your needs than what you thought you were looking for. Lawrence Block

There was a week in november that really added to my collection for "Beads". I was getting ready for a big climate change event (see…

I tweet, so I learn. How to get started?

Last Friday we were out with a group of work-friends to celebrate two weeks of excellent teamwork. Monica, the communications officer, and I had send a tweet into the world to summarize the main insights gained, or rather confirmed in the context of Nepal, and linked it to my earlier blog on the issue 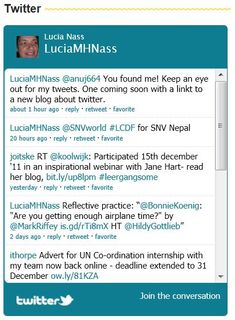 Are you a TED fan yet? Ideas worth spreading!

Ever since I ended my latest fulltime contract in April I have thrown myself into the virtual world. It's amazing what you can do and learn these days from the comforts of your chair. Behind every space I discover, there is a wealth of other hidden spaces. It is so inspiring.

One of the permanent treasures in my google reader (see below) are the TED Talks: videos of under 18 minutes where passionate doers and thinkers give the…

Collaboration is not a marriage!

The title slogan is not mine, but I remember reading in some of the partnership literature that ‘collaboration is not a marriage’. You don’t have to love each other. The whole point of collaboration is that each party has something unique to achieve and needs the other to do it. Of course it does help if the parties like each other. In case collaboration is expected to achieve better results, how can we realize more likability among organizations, especially when they have potentially…

'It's not the biggest, the brightest, or the best that will survive, but those who adapt the quickest'. Charles Darwin

In June I joined a guided reading of the Barefoot Guide 2: learning practices in organizations and social change. (Download this and other Barefoot resources from here). When I saw the announcement of this initiative I immediately jumped at it. Since last April I am freelancing again,…

I was reading Ian Thorpe's latest blogpost on Open data - experience needed. Insightful as usual, weighing the pro's and cons of the fact that more and more development data are being made available publicly. Indeed, ever more data are available, but…

I have lived in different cultures for more than half of my life. It has changed me in many ways; see for instance my blogpost about Facilitator Certification. Not only I have changed, my native country, The Netherlands, has changed too. The Dutch politics are beyond me these days, and I also find people much more stressed. When I stand in line in the supermarket to pay for…

This new Climate Planning site brings together over all sorts of tools for climate change planning. Although it is focused on tools for policy makers, it does include sub-national/community/human rights based tools like CARE's Climate Vulnarability and Capacity Assessment Handbook.

I'm blogging about this site for two reasons:

A literature review by chance2sustain on water governance approaches made me think about my ‘building professional bridges’ quest from the angle of differing perspectives.

Bellagio Initiative: Human Wellbeing for All

The Broker is leading an online discussion on the Bellagio Initiative. In a nutshell this initiative aims to rethink development and phylanthrophy for the 21st century. In this blog, I answer some of the questions:

In my previous blog, I mentioned that the climate change world is filled with attempts to “integrate”, for instance integrating climate change adaptation into ongoing development programs. Big challenges like climate change adaptation require professionals from vary different scientific backgrounds and value systems to overcome their differences and develop joint action and research initiatives. In this context, I launched a search for experiences with bridging professional…